G'huuns encounter space can be separated into two different areas, the Arena Floor and the Upper Platforms. 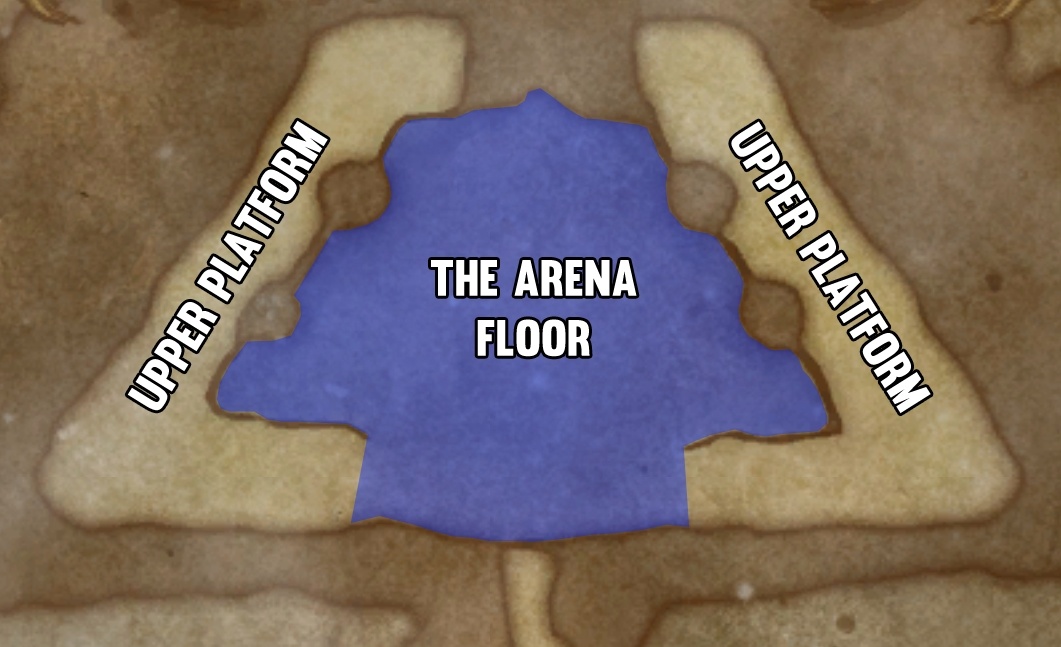 The Arena Floor is the main area where the group engages the adds during phase one, and the boss during phases two and three.

Power Matrix orbs to a Reorigination Drive during phases one and two.

Throughout phases one and two, the Upper Platforms will have a

Power Matrix orb spawn towards the southern end of one of the platforms. 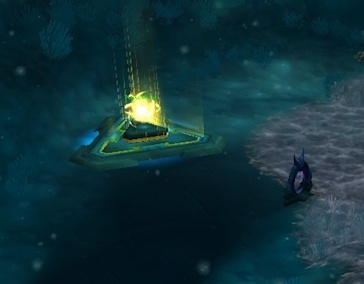 Power Matrix always spawns on in this area.

Teams of players need to move the

Power Matrix north along the platform and then deposit it in the Reorignation Module.

To begin moving the

Power Matrix along the platform, a player can right click on the

Power Matrix to pick it up and hold it. 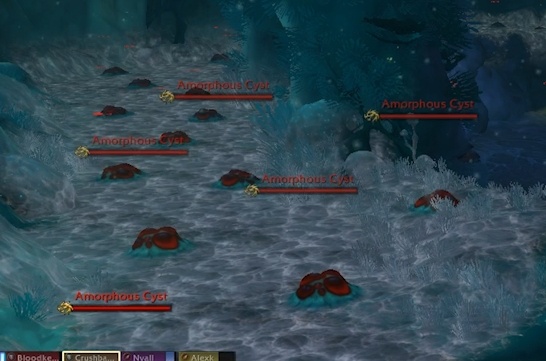 Damage the Amorphous Cysts to reduce the size
of their slowing

Power Matrix between each other until they reach the end, at which point they can deposit it into the Reorigination Module.

Both of the Upper Platforms are coated in Amorphous Cyst adds.

As soon as the

Power Matrix has been deposited into the module or destroyed by hitting the ground, the players who interacted with that particular

Power Matrix will receive the

Whilst on the Upper Platforms, players will be taking a small amount of damage every 2 seconds via the Unclean Pathogen.

During phase one, G'huun will engage the party from afar whilst held up in his protective lair. 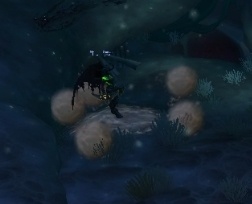 Move away from the group when
afflicted with

Explosive Corruption debuffs onto random non-tank players who are on the Arena Floor.

Explosive Corruption will also send out 5

Virulent Corruption orbs that radiate across the encounter space, dealing a moderate burst of damage to anyone it contacts.

Thousand Maws to spawn two different adds throughout the phase that the raid needs to deal with.

Cyclopean Terrors spawn spread around the encounter space in groups of 3-6. These adds do not need to be tanked.

Dark Young adds spawn singularly alongside the Cyclopean Terrors. These adds need to be tanked and will cast

Massive Smash at the tank, dealing a large burst of physical damage whilst knocking them back. 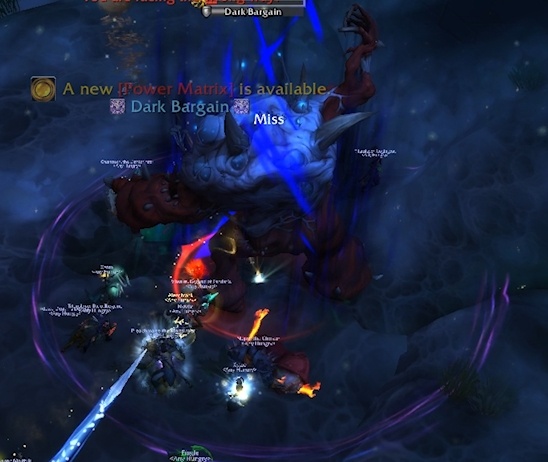 Do not gain two stacks of

The Dark Young have an energy bar which fills over time. Upon reaching 100% energy they will begin to cast

The group should kill the Dark Young as the second priority, mainly by cleaving damage off of the Cyclopean Terrors onto the Dark Young. 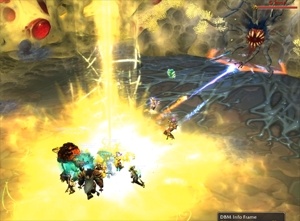 Stack up to help healers
out-heal the

Reorigination Blast has completed, G'huun will emerge from his protective lair and enter the encounter space.

G'huun will no longer spawn any

Thousand Maws adds during this phase, but he will still continue to apply

G'huun needs to be tanked during phase two. With each melee attack he will deal an additional burst of plague damage to the tank via

On a timer, G'huun will unleash a wave that radiates across the entire Arena Floor, dealing damage and applying a stack of

Putrid Blood to all players in the area. 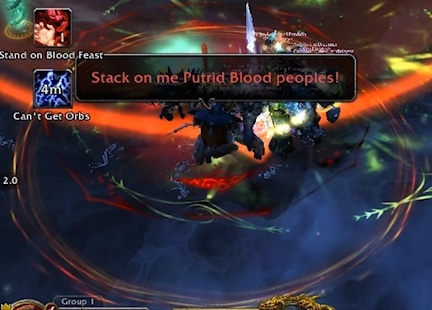 Stack up on the

Wave of Corruptions, the boss will hold this ability and instead place the

Blood Feast debuff on to a random non-tank player on the Arena Floor.

The Gibbering Horror will spawn with stacks of the

Blood Might buff, increasing it's maximum health and damage done by 5% per stack.

Throughout this phase, the raid should be triggering as many

Reorigination Blasts as possible, as this will allow the group to make meaningful progress through the bosses large health pool.

G'huun will destroy the Reorigination Drive upon entering the phase, preventing the raid from triggering any additional

As the Reorigination Drive is destroyed, several parts of the ceiling will

Collapse into the encounter area.

As the boss will no longer cast

Wave of Corruption will not be reset during this phase.

Gaze of G'huun ability in this phase.

Aside from numerical changes, in which the boss has less health and deals less damage, there are several mechanical changes to the Raid Finder difficulty version of this encounter.

Explosive Corruption will only send out 3

Virulent Corruption orbs upon expiration, down from 5.

Blood Feasts duration is 8 seconds, down from 10, and it's

Putrid Blood removing range is 12 yards, up from 10.

Aside from numerical changes, in which the boss has more health and deals more damage, there are several mechanical changes to the G'huun encounter on Heroic difficulty.

Virulent Corruption orbs that spawn from the

Explosive Corruption will apply a new instance of

Although players on the Upper Platforms will be taking slightly higher damage from the Unclean Contagion, the damage isn't high enough to require a dedicated healer to counteract it.

The raid will need to occasionally deal with a new add: the Blightspreader Tendril.

The Blightspreader Tendril spawns with 100% energy which slowly depletes over time.

A player mind controlled by gaining two stacks of

Dark Bargain will only have the effect removed upon death, rather than at 50%. 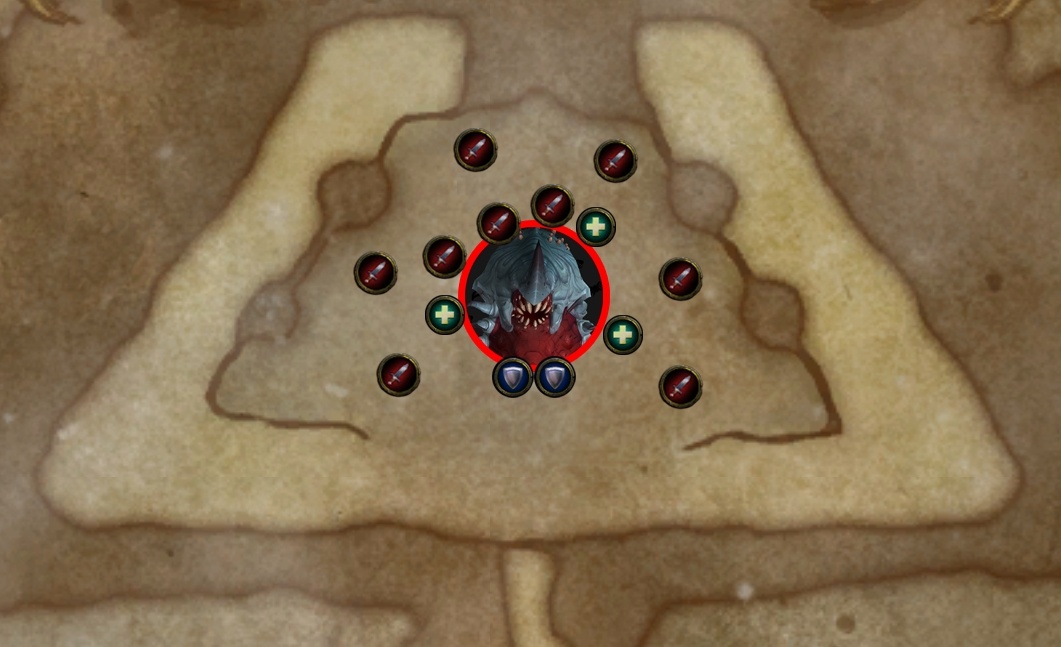 Example of raid positioning that will minimise splash damage during phase two.

Wave of Corruption washes across the raid, each player will also pulse out damage and knock back any other player within 5 yards. This splash damage also applies an additional stack of

Blood Feast has been reduced to 8 yards, down from 10.

Similarly to phase two, the entire raid must remain spread 5 yards throughout the phase to ensure they do not splash damage onto one another when

Wave of Corruption is cast.

Example of movement required to deal with the

G'huun will continue to cast his abilities during the

Wave of Corruption. The group must remain spread five yards whilst moving from these growths.

Aside from numerical changes, in which the boss has more health and deals more damage, there are several mechanical changes to the G'huun encounter on Mythic difficulty.

Explosive Corruption is now applied to up to 12 players at once, up from 1.

Thousand Maws add or a Gibbering Horror add dies, a Spawn of G'huun add will emerge from their corpse.

The Amorphous Cysts on the Upper Platform have

Tendrils of Corruption listed as an ability.

Matrix Surge will move towards you. This surge of energy deals lethal damage to all players within 4 yards every 0.5 seconds.

The Reorigination Drive will only be charged if two Power Matrices are deposited within 3 seconds of one another.

The Gibbering Horror add will form into a pool of

Blighted Ground upon death, reforming back into a Gibbering Horror with 80% health after 50 seconds.

Throughout phases two and three, G'huun will spawn three