As Grong has different names for adds and spell names, we've listed out the names of both the Alliance and Horde names below. The Guide will use the Horde versions.

Grong gains rage passively over time and once he reaches 100% rage, he will cast

Tantrum has been triggered, the boss will attempt to spend his rage in chunks of 25. Each chunk of 25 rage will cause another blast of damage to the raid.

The raid can trigger the boss into a

Tantrum before 100% rage by making use of the Apetagonizer 3000 adds that spawn throughout the fight. 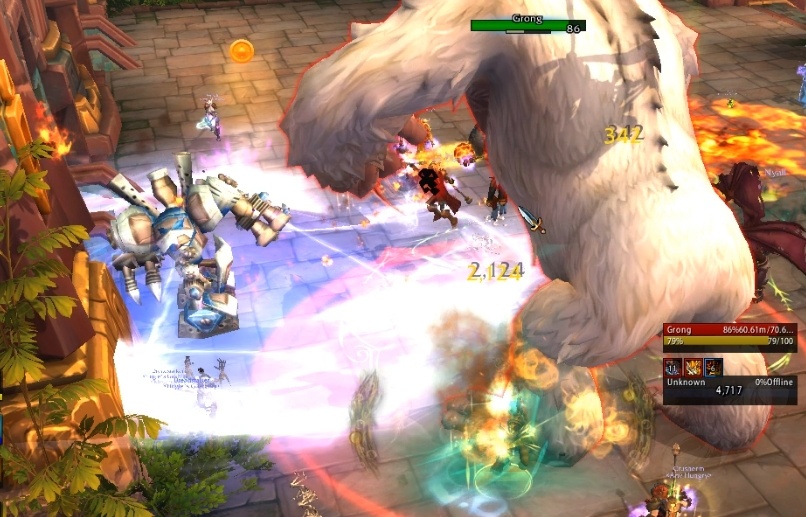 Keep Grong 15+ yards away from
the

When the Apetagonizer 3000 dies, it will explode with a

Lightning Detonation. This deals low nature damage and knocks back all players within 15 yards.

Apetagonizer Core orb will appear on the ground. A player can run into this orb to consume it and gain a 20 second debuff. Apetagonizer Core orb to absorb it!

Grong's rage gain will accelerate once he hits certain health thresholds throughout the encounter.

Apetagonizer Core, potentially leading to a third additional hit in the later stages of the encounter.

Note: The Rage Acceleration mechanic was absent during Normal and Heroic testing and was only present for Mythic testing. Due to this, we cannot be 100% certain as to how much the buffs affect the boss rage generation on Normal and Heroic difficulties.

Throughout the encounter, Grong will occasionally unleash a series of three strong abilities directed at the tank. The combo is completely random: the abilities that Grong chooses and their order will be different every time.

There are two abilities the boss can chose from:

Rending Bite. Each ability has a 2.5 second cast time.

Bestial Combo, as well as the debuffs that both tanks have during this time, the ability is easily countered with well timed taunts. Avoid standing within the fire
when

Every ~25 seconds, a missile will fly towards a random ranged player. It will explode once it reaches the player, dealing moderate fire damage to all players within 10 yards and leaving a patch of

Megatomic Fire on the ground.

Note: Although the target of this ability was once able to be tracked via a WeakAura, this seems to no longer be the case as of the most recent mythic testing.

On a timer, Grong will slam a player within melee range with his

Reverberating Slam ability. Non-tank players are always prioritised to be targeted by this ability. Move away from the echo after

Players within melee range of the boss should attempt to spread around the boss as much as possible to help reduce the amount of players hit by the ability.

Aside from numerical changes, in which the boss has more health and deals more damage with its abilities, there are a few mechanical changes to the encounter on Heroic difficulty.

Every ~20 seconds, Grong will unleash a

Ferocious Roar. This is a short duration uninterruptible cast which deals a moderate burst of physical damage to all players within 80 yards. Move away from the raid with

At the end of each

Bestial Throw at the current target.

Aside from numerical changes, in which the boss has more health and deals more damage with its abilities, there are a few mechanical changes to the encounter on Mythic difficulty.

Ferocious Roar is an instant cast spell on mythic difficulty. Make sure to interrupt both Apetagonizer 3000 adds!

Two Apetagonizer 3000 adds spawn in at a time, up from one.