Kael'thas Sunstrider is a friendly NPC that can be found on an elevated platform on the far end of the room. He begins the encounter with 10% health and the raid needs to heal him to full to defeat this encounter.

Four interactable Soul Pedestals are located near Kael'thas Sunstrider, two on either side of him.

Soul Infusion did not seem to be healing the boss for the amount of damage taken by the players, making use of the Soul Pedestals entirely useless during the most recent testing. We believe this will be adjusted for when this boss reaches live servers.

Four interactable Soul Pedestals are located near Kael'thas Sunstrider, two on either side of him.

Soul Infusion did not seem to be healing the boss for the amount of damage taken by the players, making use of the Soul Pedestals entirely useless during the most recent testing. We believe this will be adjusted for when this boss reaches live servers.

Throughout phase one, waves of adds will flood the encounter space. These adds need to be understood, controlled and killed for the raid to successfully defeat this encounter.

This large add will usually spawn by itself by flying down into the centre of the room. 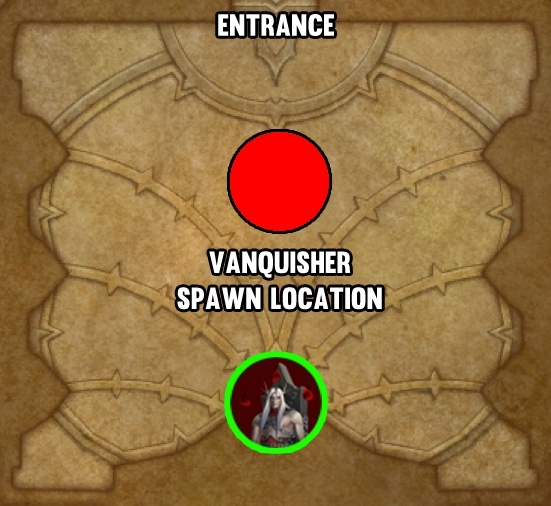 Reverberation to the vanquisher, increasing damage dealt by

Concussive Smash by 25% and this stacks.

Vanquished: a bleed which lasts 20 seconds and can stack.

These adds will spawn in groups of 4-6 by flying around to the edges of the room. 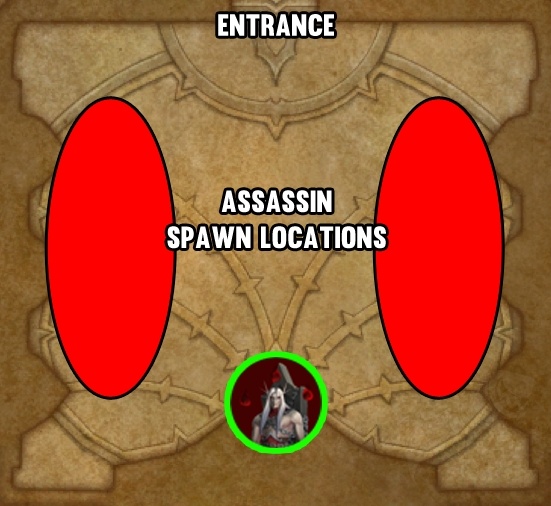 Crimson Flurry marks several players. Moments later the assassin will teleport to each of these players dealing damage and applying a nasty bleed debuff to all players within 8 yards of the marked target.

The Bleakwing Assassins will cast

Return to Stone when they reach ~30% health. This 8 second cast causes the add to stand completely still and will restore them to full health upon completion. 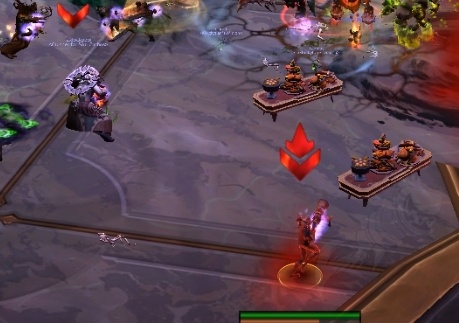 Spread out 8+ yards when marked with

These adds spawn in groups of 3-5 by appearing at the entrance of the encounter space. They are also present at the beginning of the fight, with two being found on either side of the room. 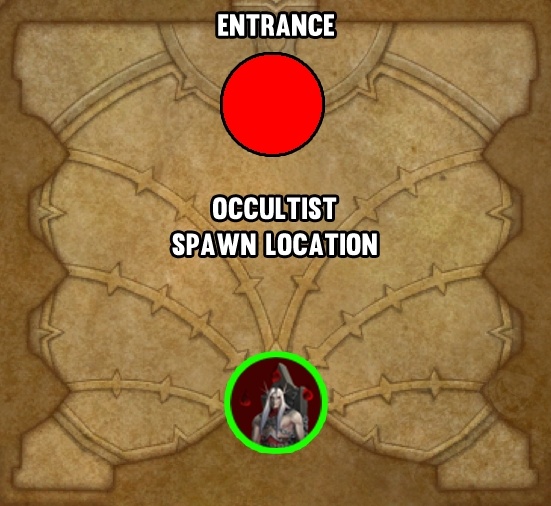 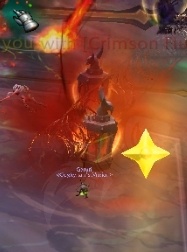 Vulgar Brand is an interruptible spell cast occasionally by these adds. If successful, this spell deals a small burst of shadow damage and applies a 35% damage taken debuff to a random player for 15 seconds. This debuff can be dispelled as a magic effect.

Beta Note: This spell text implies that the cast targets "all enemies", meaning that the entire raid should get hit by it. This wasn't the case in most recent testing, as it only hit one player.

Door of Shadows is an uninterruptible spell cast occasionally that will teleport the Vile Occultist to a random nearby location.

Upon death, the Vile Occultist will spawn an Essence Font at their location. This is a friendly NPC that will slowly lose health over time as it lays on the floor.

Shattering Ruby at random players, dealing low physical damage to that player and anyone within 3 yards. 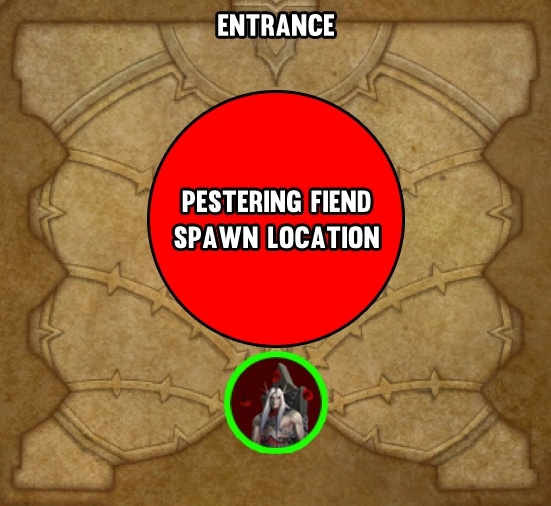 These adds spawn in two small groups on either side of the entrance gate. These groups can contain ~1-3 adds each. These adds do not need to be tanked. as the infusers will ignore all players and rush over to the Soul Pedestals next to Kael'thas Sunstrider. Upon reaching their destination they will channel 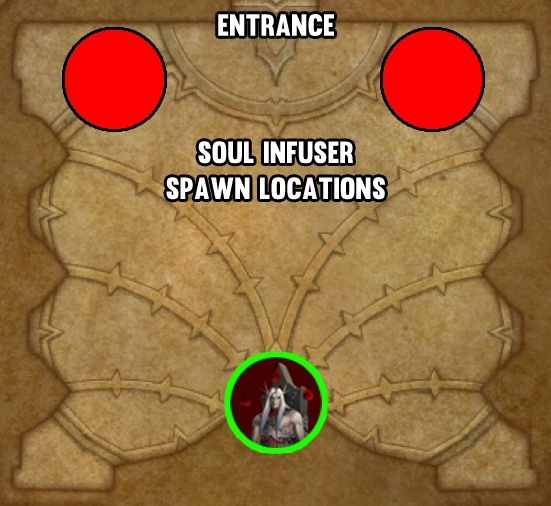 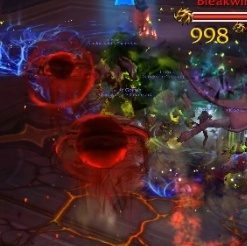 Click on the Infuser's Orb to gain a stack of

Upon death, the Soul Infuser drops an Infuser's Orb which is an interactable object.

This add is present at the beginning of the encounter and will never respawn. It needs to be tanked and will occasionally channel

Greater Castigation, dealing moderate shadow damage to random selected players and anyone within 6 yards every 0.5 seconds over 6 seconds. 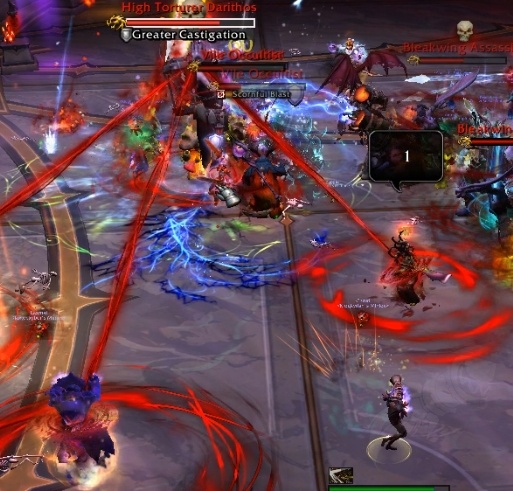 Spread 6+ yards if targeted by the

Upon reaching 40% and 90% health, Kael'thas Sunstrider manifests a Shade of Kael'thas add in the middle of the encounter space.

It is currently unclear as to whether or not the Minister of Vice adds will spawn in this phase.

The Shade of Kael'thas will frequently cast

Fiery Strike, dealing moderate fire damage and applying Burning Remnant debuffs to all players within a 12 yard cone directed at the tank.

The Shade of Kael'thas gains energy over time. At 100 energy he casts

Blazing Surge, which deals a moderate burst of fire damage to all players within a large 40 yard frontal cone directed at the tank.

Beta Test Note: This mechanic is listed as spawning Smoldering Remnant patches when it is cast. This was not present as of most recent raid testing. If it is present on live, bait the cast towards a wall to keep the room clean. 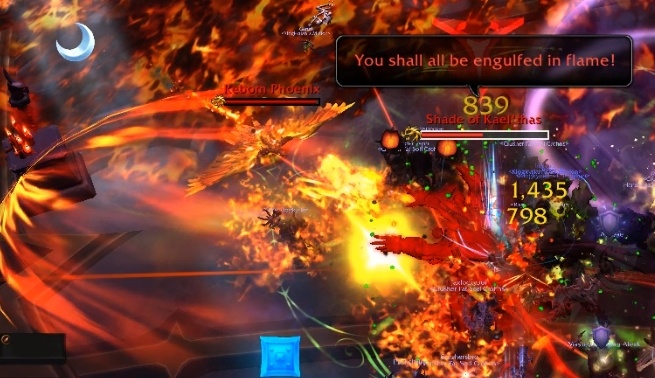 Sidestep out of the bosses

Two Reborn Phoenix adds will spawn on either side of the mini-boss as he appears in the arena.

As these adds always spawn in the middle of the encounter space, we recommend that the boss is dragged to a nearby wall, away from the adds. 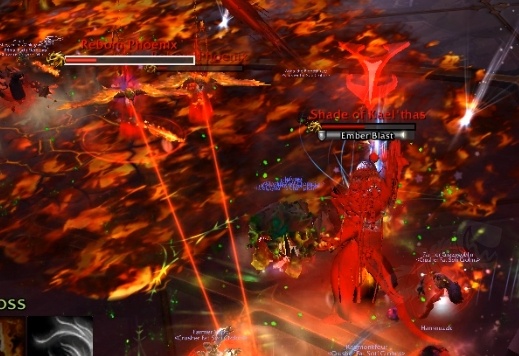 Crowd control and kill the Reborn Phoenixes before they reach the raid!

A random non-tank player is occasionally marked with

Ember Blast. After 5 seconds, that player will take lethal fire damage and receive 6 stacks of 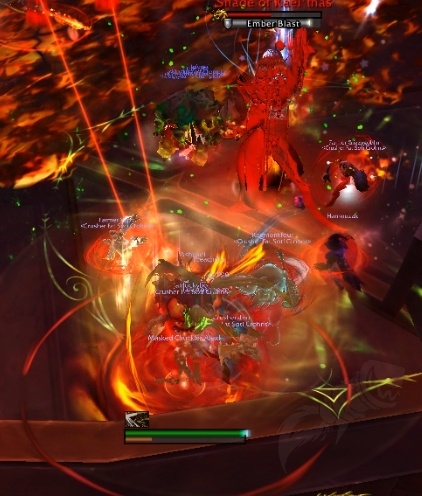 Stack on the player targeted by

Ember Blast to split the damage they take!

Once the Shade of Kael'thas reaches 50% he will despawn and Kael'thas Sunstrider will be healable via player spells and Soul Pedestals once more.

Pestering Fiend adds will explode on death via

Fragmentation, dealing a moderate burst of physical damage to all players within 7 yards.

Blazing Surge targets a random players location, rather than the primary targets location.

During phase one, Kael'thas Sunstrider will occasionally gain

During phase two, the Shade of Kael'thas will occasionally get 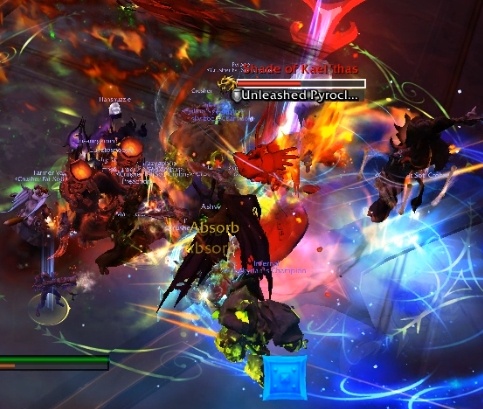 Cloak of Flames to interrupt the

Reborn Phoenix adds do not despawn when the Shade of Kael'thas despawns. This means you will have to deal with them for the rest of the fight.