Beta Test Note: This boss was only tested once on heroic difficulty and not on any other difficulty. Therefore the information provided in the guide is based on the heroic version of the encounter, datamining, and the in-game dungeon journal. This guide will be updated when this boss is encountered on live servers.

Inevitable passive. This forces the boss to teleport to the current tank if he is not within melee range of the boss.

The boss will occasionally mark 2 players with 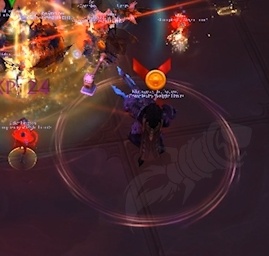 Move away from others when marked for

Denathrius has an energy bar that passively fills over time. Upon reaching 100% energy, he will cast 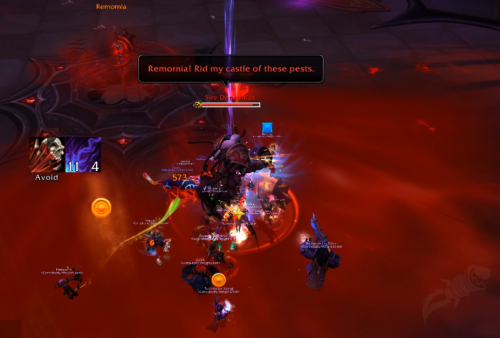 Move to a clear section of the room when

At the beginning of the encounter, all players receive 4 stacks of the

Three times throughout Phase One, the boss will cast

Players should stack up next to the boss and position themselves so that they are thrown against the wall, making sure not to be thrown into any

Six times throughout Phase One, the boss will cast

Cleansing Pain towards the current tank.

Echo of Sin adds are immobile and immune to all forms of crowd control. They simply channel moderate damage to the raid every 2 seconds with the

To deal with the

Burden of Sin and

Blood Price mechanics, the raid should do the following:

Blood Price as well as make the intermission even safer.

Upon reaching 70% health, the boss teleport to the middle of the room, despawn all

Desolation pools in room and drag all players to his location, stunning them in the process.

If all went well, you just move to the boss to pass the intermission!

Players must enter this phase with a maximum of two*

Burden of Sin stacks, as this allows them enough movement speed to make it to the boss in time.

Burden of Sin were "sometimes" able to reach the middle and cleanse their stacks, but not every time. We're currently unsure if this was intended or not.

Once the cast ends, the boss will drag all players down into a new encounter area where Phases Two and Three will take place.

From the beginning of Phase Two, a new add called Remornia will be active.

All the Remornia abilities and melee attacks apply a stack of

Carnage to the players hit. 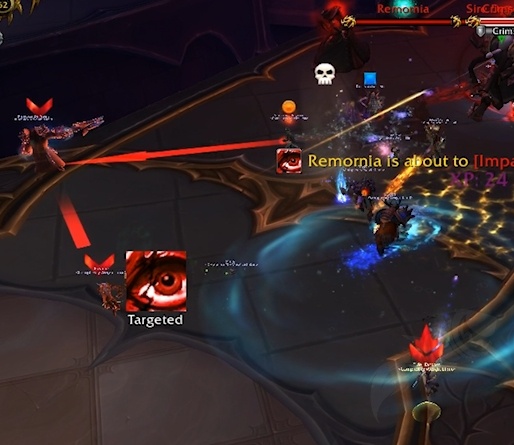 Move away from the raid when marked for

Whenever Denathrius reaches 100 energy, he will cast

Command: Massacre. This cast resets his energy back to 0%.

To create as many safe spots as possible, the raid should look to loosely spread just as

Crimson Cabalist adds will spawn in waves of 4 throughout Phase Two.

The Crimson Cabalist adds spawn on the path and the platforms!

The adds on the platforms flanking the path cannot be accessed simply by walking to them, as the platforms are inaccessible with standard movement.

Every 20 seconds, Denathrius will cast

Wracking Pain at his current tank.

Every ~40 seconds, the boss will drag all players to his current location and then summon an image of himself at that location.

Move through the mirror to get far from the

To assist in this, players can utilise the mirrors positioned at the end of each path.

Beta Test Note: Due to limited testing, information regarding all aspects of Phase Three aren't currently known. This section of the guide will be updated when this boss is encountered on live servers.

As soon as Phase Three begins, the boss enables

The Remornia add despawns and is now wielded by the boss.

This positioning will also help the raid deal with

The boss will frequently mark several players with

Upon reaching 100% energy, the boss will summon a

Sinister Reflection in the middle of the encounter space.

Ravage adds a hard enrage for this phase, as the raid needs to kill the boss before three

At the beginning of the fight, all players receive 5 stacks of

Burden of Sin instead of 4.

Feeding Time ability has been replaced by the 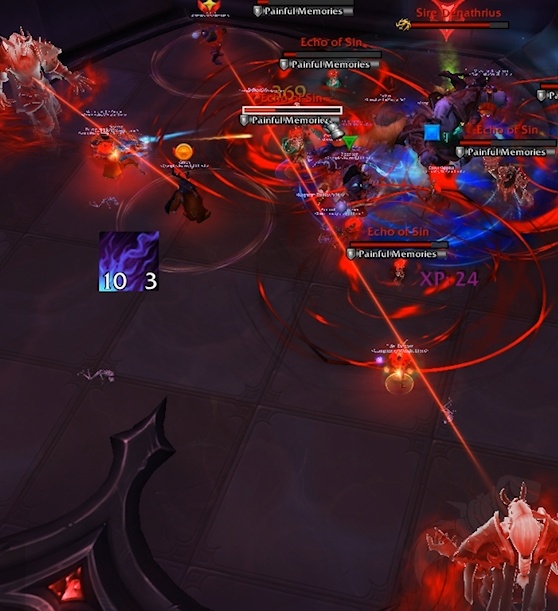 To reduce this damage to survivable levels, each marked player should have several players in their beam.

Whenever Remornia hits a player with

Massacre, a patch of

Rancorspawns at their location for 1 minute.

When a Crimson Cabalist add dies, it will spew out a volley of anima towards random players locations. 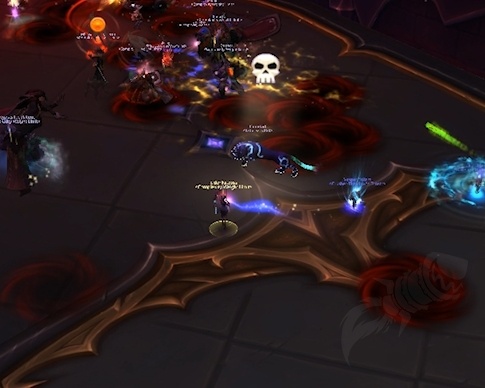 Crescendo swirlies can cover a lot of space - dodge quickly!

Fatal Finesse debuffs time out, a

Smoldering Ire orb will spawn at that location.

Beta Test Note: This boss has not yet been tested on mythic difficulty. The information below is derived from the dungeon journal, datamining and heroic difficulty testing.

At the beginning of the fight, players receive 6 stacks of

Cleansing Pain deal a burst of shadow damage to allies within 2 yards.

Echo of Sin adds despawn after 14 seconds. When this occurs the add will grant back the

Burden of Sin stack to the player that spawned it.

At the beginning of Phase Two, "Denathrius calls upon some of his most trusted lieutenants".

All Nightcloak adds have a 50 yard aura which deals low damage every 2 seconds:

Each add has one individual mechanic:

Searing Censure: Every 5 seconds this add will send out missiles in all directions. If hit, a player takes a burst of shadow damage and is silenced for 6 seconds.

Hollow Grasp: Whenever a player within 25 yards hits Baron Duskhollow with an attack, he grips them to his location.

Gloom Veil: This add is shrouded in an anima cloud. Players cannot target in or out of this cloud.

During phase three, the boss is listed as having the

Indignation is cast, the mirrors in the room begin to warp. What awaits players who pass through a mirror during this time is known only to Denathrius himself."