A Flash of Hostility - 60 Energy

The Serpent and the Phoenix - 100 Energy

The two bosses in this encounter do not share a health pool, however the raid is encouraged to keep their health percentages similar due to the Monk's

This passive only works one way. In theory, the raid can have the Monk at a far lower health percentage than the Mage and suffer no negative consequences.

The Monk has a couple of mechanics that primarily require the attention of the tank.

The Monk will cast

Multi-Sided Strike on the tank every ~30 seconds. This ability will teleport the tank high into the air and place them on a green platform.

If the tank faces the image that is flying towards them, they will not take any damage and will gain a debuff which increases their damage and healing done for 20 seconds. This buff can stack.

Face the images in the order they appear! 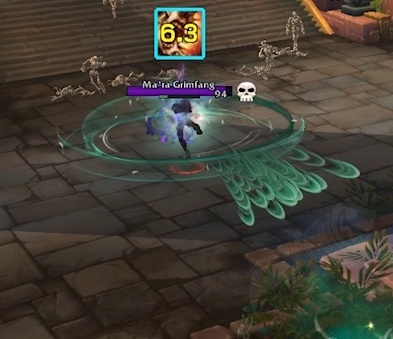 Engage the Monk in
melee combat to stop

The Mage has mechanics that require the attention of the entire raid.

Instead of melee attacking, the Mage frequently casts

Fireball at the current tank.

Tanks should actively seek to keep the

Rising Flames stacks low, as to ensure that the 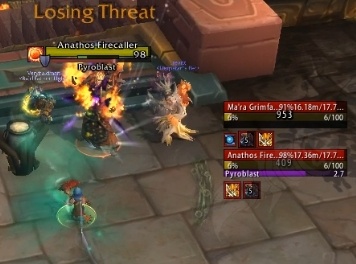 Destroy the shield to kick the

Fire Shield to themselves.

As soon as the

Fire Shield has appeared, the Mage will begin to cast

Pyroblast at a randomly selected player.

The Mage will apply several

Searing Embers magic debuffs across the raid, each with a different duration (a maximum of 10 seconds and minimum of 4 seconds).[/li]

Healers need to dispel all of the Searing Ember debuffs as soon as possible, prioritising those with a shorter duration.

Both bosses will gain energy passively over the course of the encounter. The bosses will cast a combined Team Attack at certain energy thresholds. 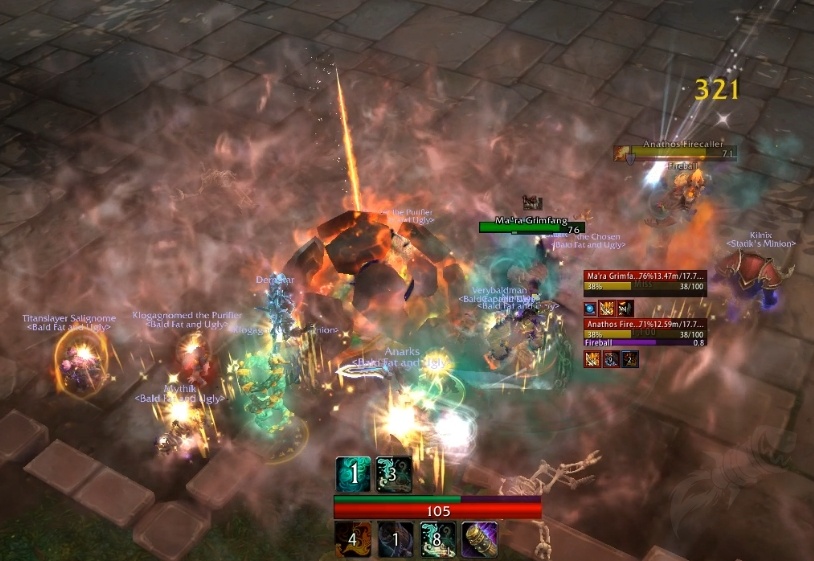 At 30 energy, the bosses will summon three Living Bomb adds. These adds are stationary and do not need to be tanked.

Each Living Bomb is surrounded by a

Chi-Ji's Song smoke cloud. This deals low ticking nature damage to those who stand within it.

The entire raid should stack within a single Living Bomb smoke cloud and defeat that Living Bomb, before moving onto the next as a single unit.

During PTR testing, the three Living Bomb adds would occasionally have a different health pools from one another.

A Flash of Hostility 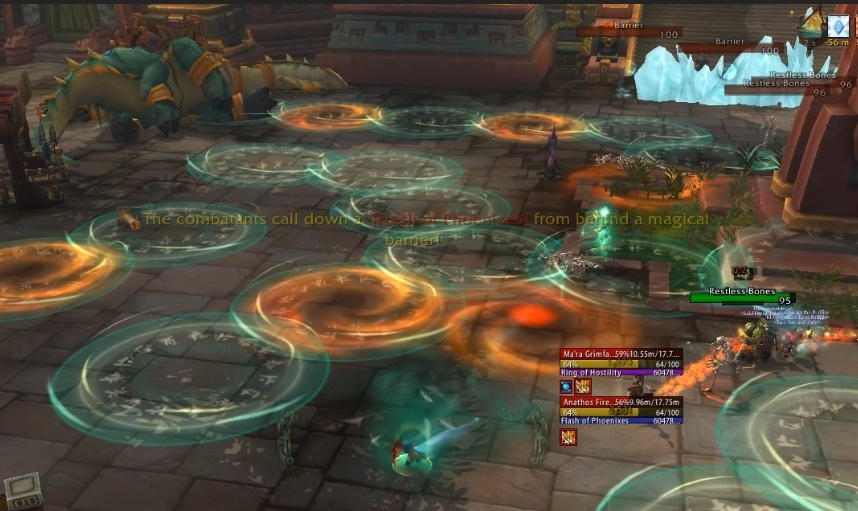 Traverse the maze to reach and destroy the Barrier!

The Monk will then spawn a maze consisting of Rings of Hostility. These act identically to the monk spell Ring of Peace.

The Mage will continuously mark areas with

A large barrier forms between the bosses and the raid. The barrier is made of four attackable sections.

The raid needs to move through the maze and get to the barrier as soon as possible, all whilst dodging the

The Serpent and the Phoenix

Upon reaching 100 energy, both bosses will transform into an empowered form.

The Monk will morph into a Jade Serpent.

The Mage will transform into a Phoenix.

On normal mode, there is no crazy rush to leave this phase, as the incoming ticking damage is pretty low.

Both the Monk and the Mage have gained an additional ability that they will frequently cast throughout the encounter. 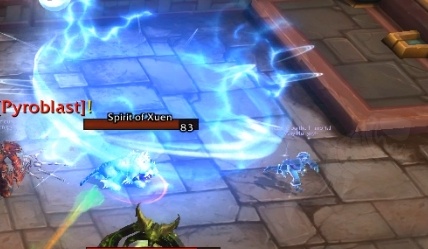 Kite the Spirit of Xuen add while the raid kills it!

The Monk will occasionally spawn a Spirit of Xuen add. This add will fixate on a random non-tank player until the player dies or the add dies.

All DPS should switch to the Spirit of Xuen add as soon as it spawns and focus it down, using slows and stuns to help the fixated player kite more easily.

The Monks Multisided Strike will now summon four visions, up from three. 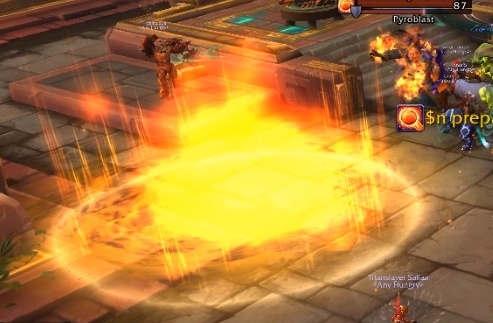 The Mage will frequently spawn several

Magma Traps. These are red zones which will remain on the ground until a player runs into them.

Magma Traps will frequently spawn in high traffic areas, causing considerable difficulties for players who need to move around.

Magma Traps can be done in multiple ways: 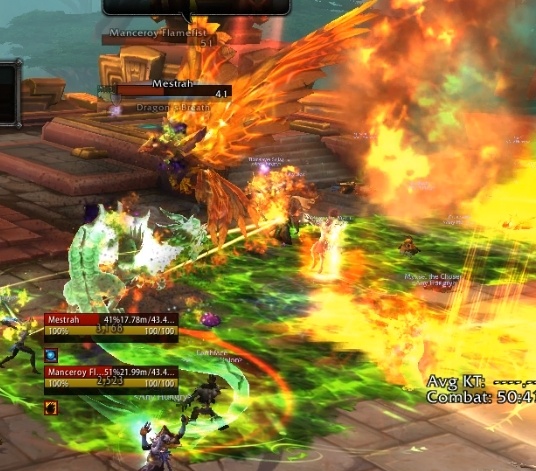 Don't stand in the fire left behind
by the

The Flash of Hostility Team Attack has been adjusted slightly on heroic difficulty.

If the raid wishes to make more sections of the barrier vulnerable to damage, players can collect

Force Orbs that are scattered throughout the

This is not a compulsory task. Instead we believe the mechanic is present on heroic difficulty to introduce players to it, before it becomes mandatory on mythic.

Serpent and the Phoenix

During the Serpent and the Phoenix Team Attack, the Monks

Dragon's Breath will leave behind a large line of fire in the direction they were facing.

Aside from numerical changes, in which the bosses deal more damage and have more health, there are a few mechanical changes for this encounter on Mythic difficulty.

The Monks Multisided Strike ability will target 15 members of the raid each time it is cast, and 5 visions will charge the players, up from 4. 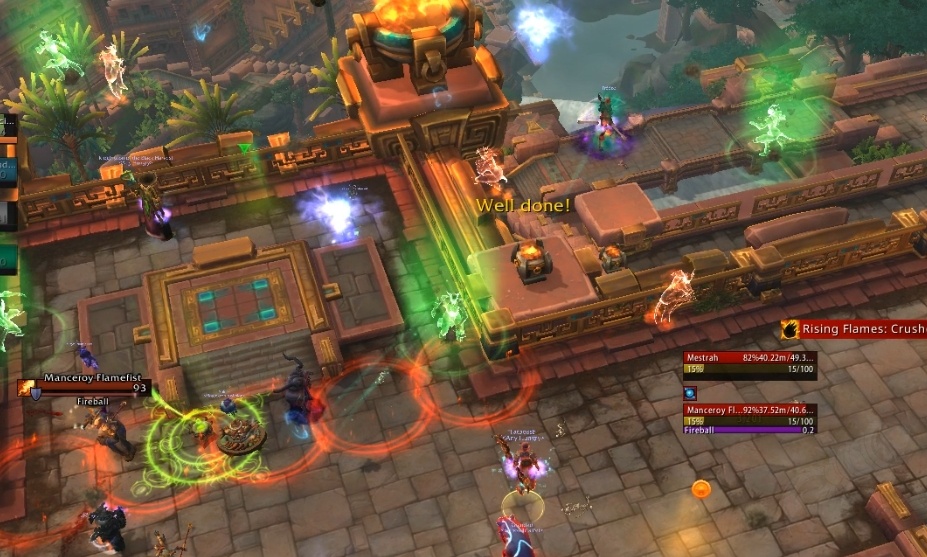 It can be hard to tell which visions are yours...

The Monk will summon two Spirit of Xuen adds, up from one.

A Flash of Hostility

During the Flash of Hostility Team Attack, none of the barrier sections will be attackable until players have used a

Force Orb on all four sections.

Whilst moving throughout the